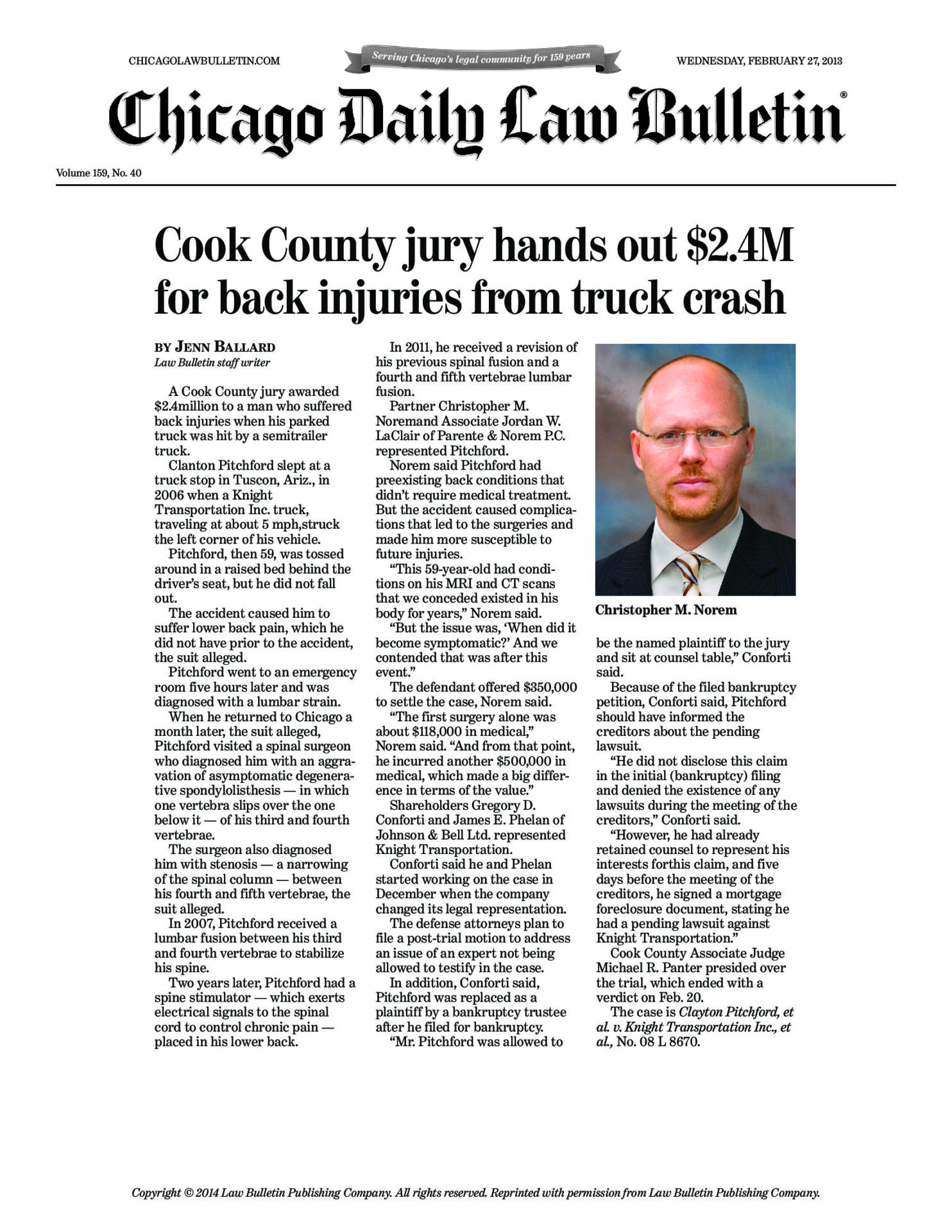 Jury awards $2.4M for back injuries from truck crash

A Cook County jury awarded $2.4 million to a man who suffered back injuries when his parked truck was hit by a semitrailer truck.

Clanton Pitchford slept at a truck stop in Tuscon, Ariz., in 2006 when a Knight Transportation Inc. truck, traveling at about 5 mph, struck the left corner of his vehicle.

Pitchford, then 59, was tossed around in a raised bed behind the driver’s seat, but he did not fall out. The accident caused him to suffer lower back pain, which he did not have prior to the accident, the suit alleged.

Pitchford went to an emergency room five hours later and was diagnosed with a lumbar strain.

When he returned to Chicago a month later, the suit alleged, Pitchford visited a spinal surgeon who diagnosed him with an aggravation of asymptomatic degenerative
spondylolisthesis — in which one vertebra slips over the one below it — of his third and fourth vertebrae.

The surgeon also diagnosed him with stenosis — a narrowing of the spinal column — between his fourth and fifth vertebrae, the suit alleged.

In 2007, Pitchford received a lumbar fusion between his third and fourth vertebrae to stabilize his spine.

Two years later, Pitchford had a spine stimulator — which exerts electrical signals to the spinal cord to control chronic pain — placed in his lower back.

In 2011, he received a revision of his previous spinal fusion and a fourth and fifth vertebrae lumbar fusion.

Norem said Pitchford had preexisting back conditions that didn’t require medical treatment, but the accident caused complications that led to the surgeries and
made him more susceptible to future injuries.

“This 59-year-old had conditions on his MRI and CT scans that we conceded existed in his body for years,” Norem said.

“But the issue was, ‘When did it become symptomatic?’ And we contended that was after this event.”

Conforti said he and Phelan started working on the case in December when the company changed its legal representation.

The defense attorneys plan to file a post-trial motion to address an issue of an expert not being allowed to testify in the case.

In addition, Conforti said, Pitchford was replaced as a plaintiff by a bankruptcy trustee after he filed for bankruptcy.

“Mr. Pitchford was allowed to be the named plaintiff to the jury and sit at counsel table,” Conforti said.

Because of the filed bankruptcy petition, Conforti said, Pitchford should have informed the creditors about the pending lawsuit.

“He did not disclose this claim in the initial (bankruptcy) filing and denied the existence of any lawsuits during the meeting of the creditors,” Conforti said.

“However, he had already retained counsel to represent his interests for this claim, and five days before the meeting of the creditors, he signed a mortgage foreclosure document, stating he had a pending lawsuit against Knight Transportation.”

Cook County Associate Judge Michael R. Panter presided over the trial, which ended with a verdict on Feb. 20.