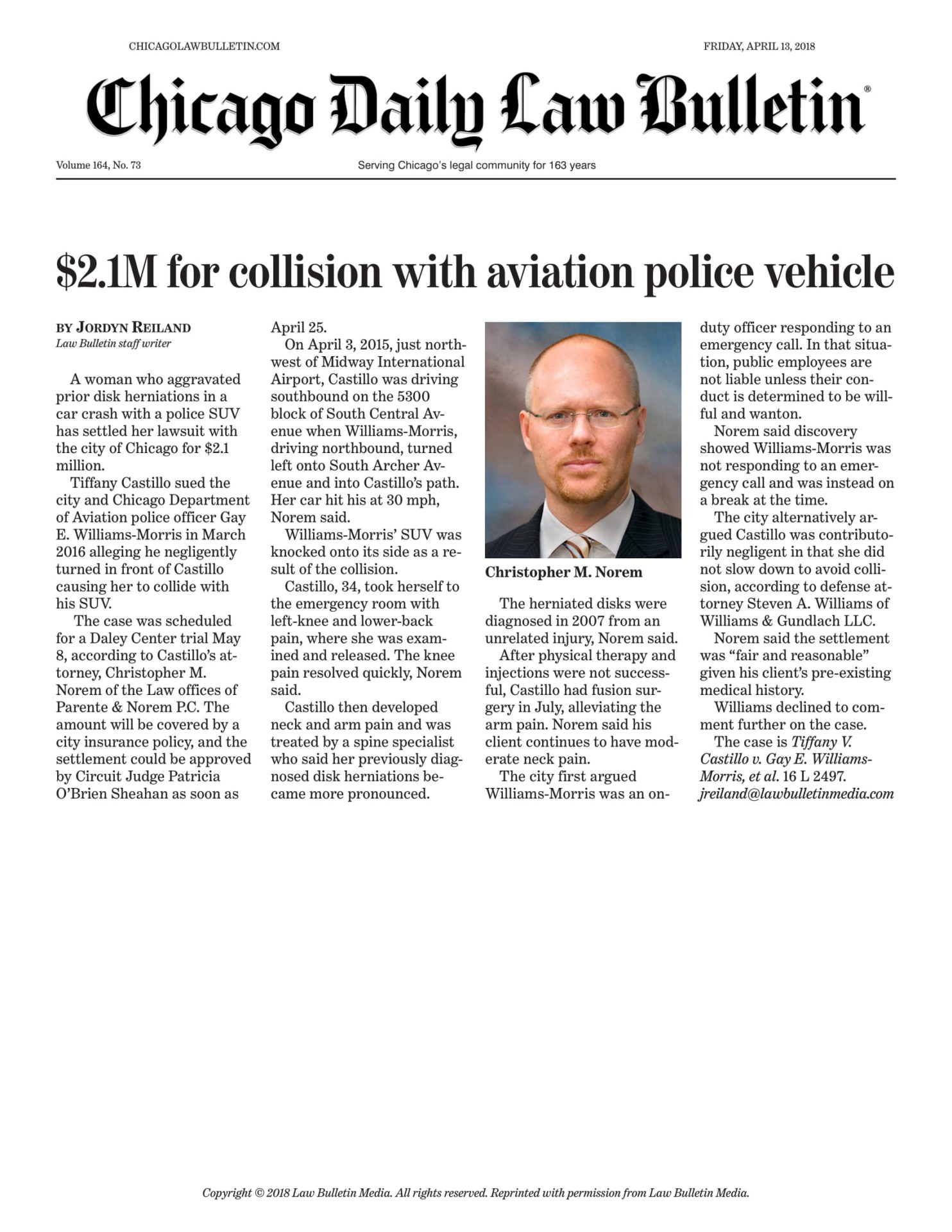 A woman who aggravated prior disk herniations in a car crash with a police SUV has settled her lawsuit with the city of Chicago for $2.1 million.

Tiffany Castillo sued the city and Chicago Department of Aviation police officer Gay E. Williams-Morris in March 2016 alleging he negligently turned in front of Castillo causing her to collide with his SUV.

The case was scheduled for a Daley Center trial May 8, according to Castillo’s attorney, Christopher M. Norem of the Law offices of Parente & Norem P.C. The amount will be covered by a city insurance policy, and the settlement could be approved by Circuit Judge Patricia O’Brien Sheahan as soon as April 25.

On April 3, 2015, just northwest of Midway International Airport, Castillo was driving southbound on the 5300 block of South Central Avenue when Williams-Morris, driving northbound, turned left onto South Archer Avenue and into Castillo’s path. Her car hit his at 30 mph, Norem said.

Williams-Morris’ SUV was knocked onto its side as a result of the collision.

Castillo, 34, took herself to the emergency room with left-knee and lower-back pain, where she was examined and released. The knee pain resolved quickly, Norem said.

Castillo then developed neck and arm pain and was treated by a spine specialist who said her previously diagnosed disk herniations became more pronounced.

The herniated disks were diagnosed in 2007 from an unrelated injury, Norem said.

After physical therapy and injections were not successful, Castillo had fusion surgery in July, alleviating the arm pain. Norem said his client continues to have moderate neck pain.

The city first argued Williams-Morris was an on-duty officer responding to an emergency call. In that situation, public employees are not liable unless their conduct is determined to be willful and wanton.

Norem said discovery showed Williams-Morris was not responding to an emergency call and was instead on a break at the time.

The city alternatively argued Castillo was contributorily negligent in that she did not slow down to avoid collision, according to defense attorney Steven A. Williams of Williams & Gundlach LLC.

Norem said the settlement was “fair and reasonable” given his client’s pre-existing medical history. 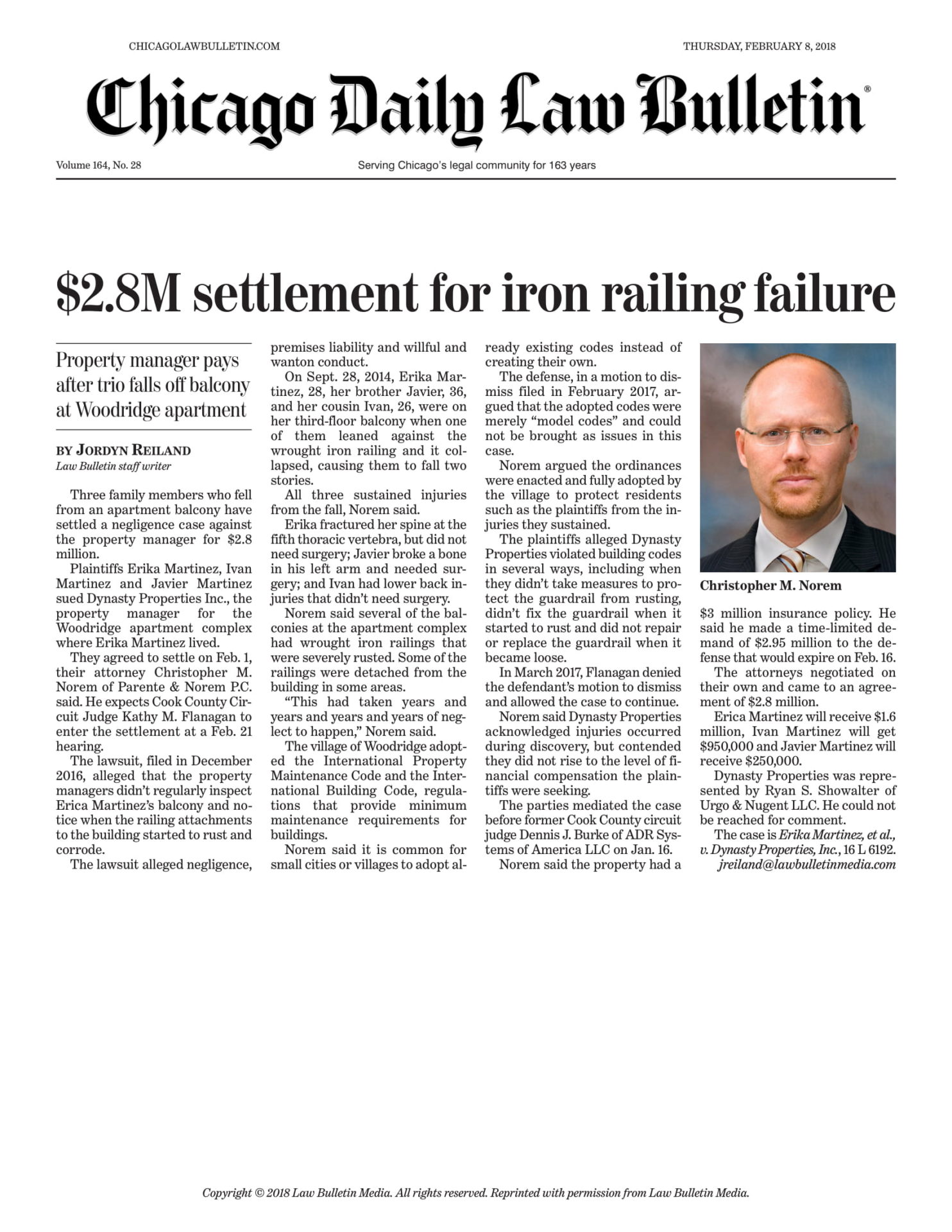 Three family members who fell from an apartment balcony have settled a negligence case against the property manager for $2.8 million.

They agreed to settle on Feb. 1, their attorney Christopher M. Norem of Parente & Norem P.C. said. He expects Cook County Circuit Judge Kathy M. Flanagan to enter the settlement at a Feb. 21 hearing.

The lawsuit, filed in December 2016, alleged that the property managers didn’t regularly inspect Erica Martinez’s balcony and notice when the railing attachments to the building started to rust and corrode.

On Sept. 28, 2014, Erika Martinez, 28, her brother Javier, 36, and her cousin Ivan, 26, were on her third-floor balcony when one of them leaned against the wrought iron railing and it collapsed, causing them to fall two stories.

All three sustained injuries from the fall, Norem said.

Erika fractured her spine at the fifth thoracic vertebra, but did not need surgery; Javier broke a bone in his left arm and needed surgery; and Ivan had lower back injuries that didn’t need surgery.

Norem said several of the balconies at the apartment complex had wrought iron railings that were severely rusted. Some of the railings were detached from the building in some areas.

Norem said it is common for small cities or villages to adopt already existing codes instead of creating their own.

The defense, in a motion to dismiss filed in February 2017, argued that the adopted codes were merely “model codes” and could not be brought as issues in this case.

Norem argued the ordinances were enacted and fully adopted by the village to protect residents such as the plaintiffs from the injuries they sustained.

In March 2017, Flanagan denied the defendant’s motion to dismiss and allowed the case to continue.

Norem said Dynasty Properties acknowledged injuries occurred during discovery, but contended they did not rise to the level of financial compensation the plaintiffs were seeking.

Norem said the property had $3 million insurance policy. He said he made a time-limited demand of $2.95 million to the defense that would expire on Feb. 16.

The attorneys negotiated on their own and came to an agreement of $2.8 million.

Dynasty Properties was represented by Ryan S. Showalter of Urgo & Nugent LLC. He could not be reached for comment.