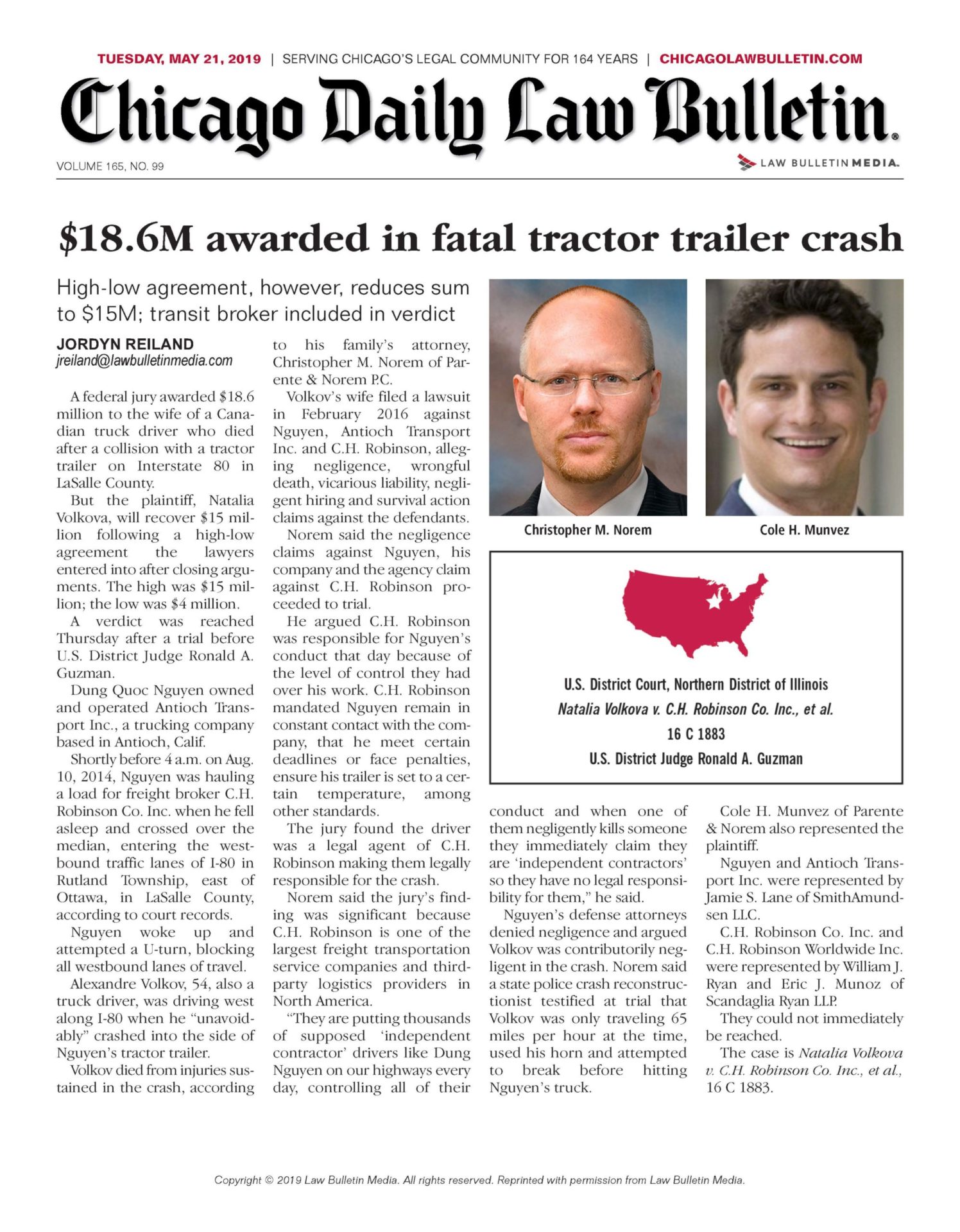 A federal jury awarded $18.6 million to the wife of a Canadian truck driver who died after a collision with a tractor trailer on Interstate 80 in LaSalle County.

But the plaintiff, Natalia Volkova, will recover $15 million following a high-low agreement the lawyers entered into after closing arguments. The high was $15 million; the low was $4 million.

A verdict was reached Thursday after a trial before U.S. District Judge Ronald A. Guzman.

Shortly before 4 a.m. on Aug. 10, 2014, Nguyen was hauling a load for freight broker C.H. Robinson Co. Inc. when he fell asleep and crossed over the median, entering the westbound traffic lanes of I-80 in Rutland Township, east of Ottawa, in LaSalle County, according to court records.

Nguyen woke up and attempted a U-turn, blocking all westbound lanes of travel.

Alexandre Volkov, 54, also a truck driver, was driving west along I-80 when he “unavoidably” crashed into the side of Nguyen’s tractor trailer.

Volkov died from injuries sustained in the crash, according to his family’s attorney, Christopher M. Norem of Parente & Norem P.C.

Norem said the negligence claims against Nguyen, his company and the agency claim against C.H. Robinson proceeded to trial.

He argued C.H. Robinson was responsible for Nguyen’s conduct that day because of the level of control they had over his work. C.H. Robinson mandated Nguyen remain in constant contact with the company, that he meet certain deadlines or face penalties, ensure his trailer is set to a certain temperature, among other standards.

The jury found the driver was a legal agent of C.H. Robinson making them legally responsible for the crash.

Norem said the jury’s finding was significant because C.H. Robinson is one of the largest freight transportation service companies and third party logistics providers in North America.

“They are putting thousands of supposed ‘independent contractor’ drivers like Dung Nguyen on our highways every day, controlling all of their conduct and when one of them negligently kills someone they immediately claim they are ‘independent contractors’ so they have no legal responsibility for them,” he said.

Nguyen’s defense attorneys denied negligence and argued Volkov was contributorily negligent in the crash. Norem said a state police crash reconstructionist testified at trial that Volkov was only traveling 65 miles per hour at the time, used his horn and attempted to break before hitting Nguyen’s truck.

They could not immediately be reached.