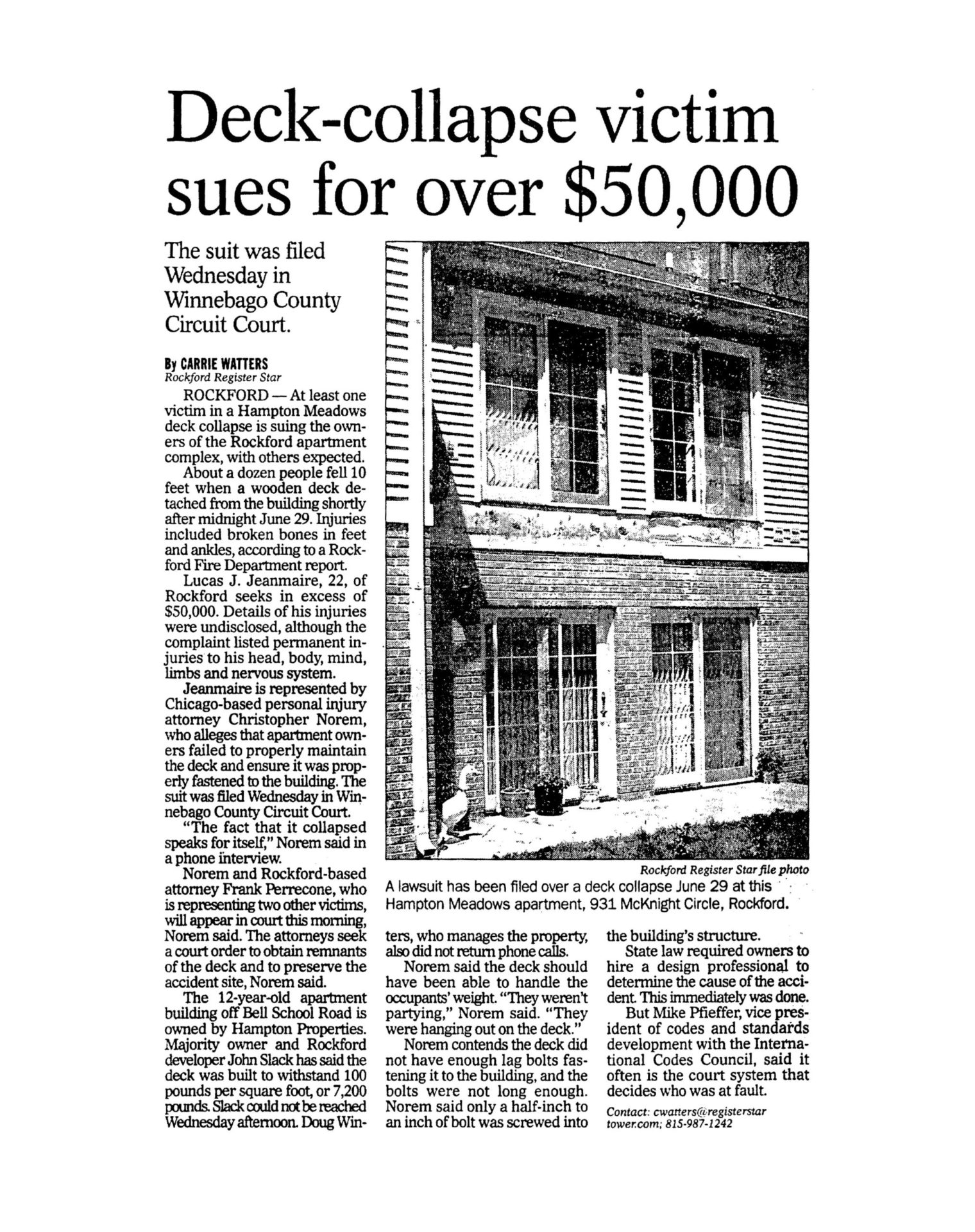 The suit was filed Wednesday in Winnebago County Circuit Court.

ROCKFORD – At least one victim in a Hampton Meadows deck collapse is suing the owners of the Rockford apartment complex, with others expected.

About a dozen people fell 10 feet when a wooden deck detached from the building shortly after midnight June 29. Injuries included broken bones in feet and ankles, according to a Rock- ford Department report.

Lucas J. Jeanmaire, 22, of Rockford seeks in excess of $50,000. Details of his injuries were undisclosed, although the complaint listed permanent injuries to his head, body, mind, limbs and nervous system.

Jeanmaire is represented by Chicago ­based personal injury attorney Christopher Norem, who alleges that apartment owners failed to properly maintain the deck and ensure it was properly fastened to the building.

“The fact that it collapsed speaks for itself, ” Norem said in a phone interview.

Norem and Rockford-based attorney Frank Perrecone, who is representing mo other victims, will appear in court this morning, Norem said. The attorneys seek a court order to obtain remnants of the deck and to preserve the accident site, Norem said.

The 12-year-old apartment building off Bell School Road is owned by Hampton Properties. Majority owner and Rockford developer John Slack has said the deck was built to withstand 100 pounds per square foot, or 7,200 pounds. Slack could not be reached Wednesday afternoon. Doug Winters, who manages the property, also did not return phone calls.

Norem said the deck should have been able to handle the occupants’ weight. “They weren’t partying,” Norem said. “They were hanging out on the deck.”

Norem contends the deck did not have enough lag bolts fastening it to the building, and the bolts were not long enough. Norem said only a half-inch to an inch of bolt was screwed into the buildings structure.

State law required owners to hire a design professional to determine the cause of the accident ‘This immediately was done.

But Mike Pfieffer, vice president of codes and standards development with the International Codes Council, said it often is the court system that decides who was at fault.