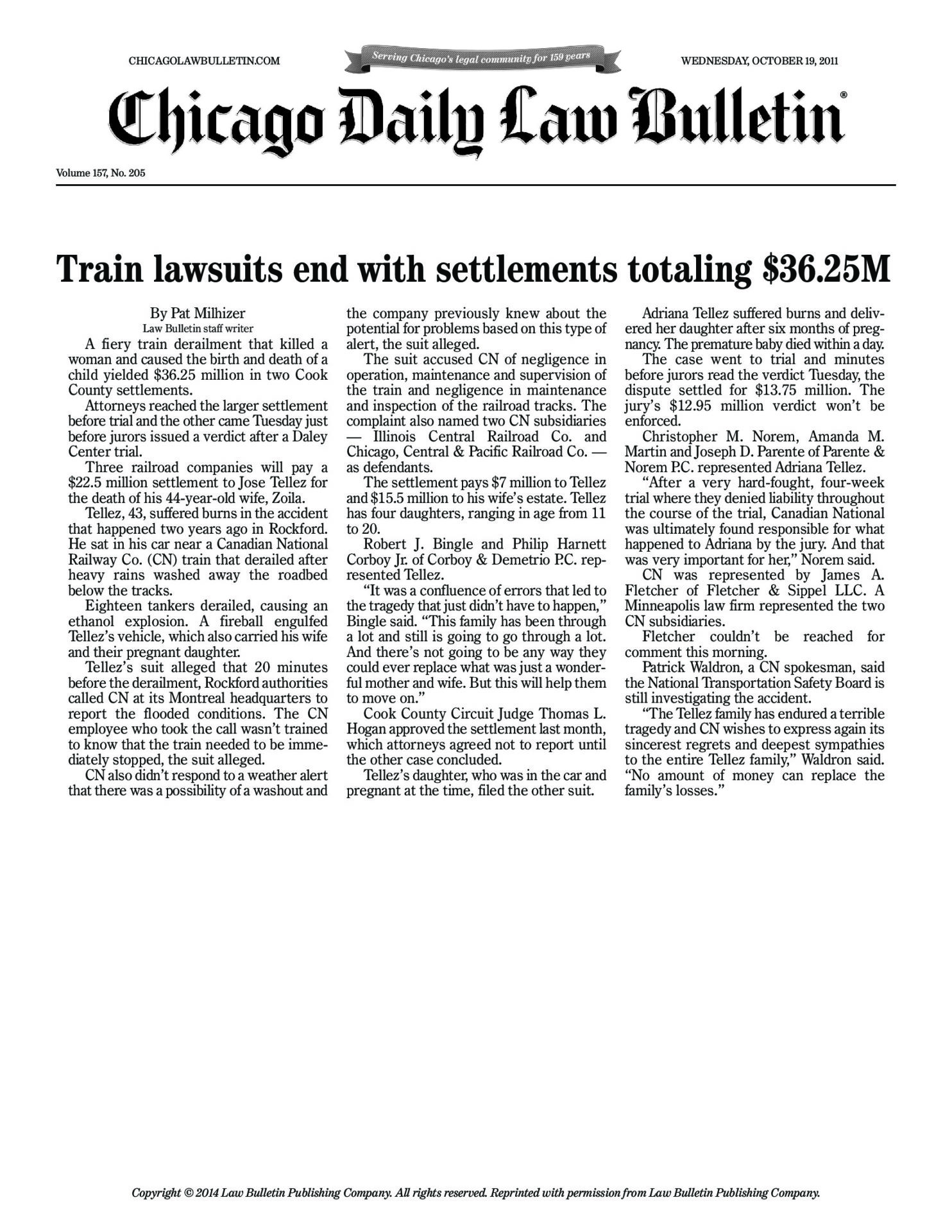 A fiery train derailment that killed a woman and caused the birth and death of a child yielded $36.25 million in two Cook County settlements.

Attorneys reached the larger settlement before trial and the other came Tuesday just before jurors issued a verdict after a Daley Center trial.

Three railroad companies will pay a $22.5 million settlement to Jose Tellez for the death of his 44-year-old wife, Zoila.

Tellez, 43, suffered burns in the accident that happened two years ago in Rockford. He sat in his car near a Canadian National Railway Co. (CN) train that derailed after heavy rains washed away the roadbed below the tracks.

Tellez’s suit alleged that 20 minutes before the derailment, Rockford authorities called CN at its Montreal headquarters to report the flooded conditions. The CN employee who took the call wasn’t trained to know that the train needed to be imme- diately stopped, the suit alleged.

the company previously knew about the potential for problems based on this type of alert, the suit alleged.

The settlement pays $7 million to Tellez and $15.5 million to his wife’s estate. Tellez has four daughters, ranging in age from 11 to 20.

“It was a confluence of errors that led to the tragedy that just didn’t have to happen,” Bingle said. “This family has been through a lot and still is going to go through a lot. And there’s not going to be any way they could ever replace what was just a wonder- ful mother and wife. But this will help them to move on.”

Cook County Circuit Judge Thomas L. Hogan approved the settlement last month, which attorneys agreed not to report until the other case concluded.

Tellez’s daughter, who was in the car and pregnant at the time, filed the other suit.

Adriana Tellez suffered burns and delivered her daughter after six months of preg- nancy. The premature baby died within a day.

The case went to trial and minutes before jurors read the verdict Tuesday, the dispute settled for $13.75 million. The jury’s $12.95 million verdict won’t be enforced.

“After a very hard-fought, four-week trial where they denied liability throughout the course of the trial, Canadian National was ultimately found responsible for what happened to Adriana by the jury. And that was very important for her,” Norem said.

CN was represented by James A. Fletcher of Fletcher & Sippel LLC. A Minneapolis law firm represented the two CN subsidiaries.

Patrick Waldron, a CN spokesman, said the National Transportation Safety Board is still investigating the accident.

“The Tellez family has endured a terrible tragedy and CN wishes to express again its sincerest regrets and deepest sympathies to the entire Tellez family,” Waldron said. “No amount of money can replace the family’s losses.”