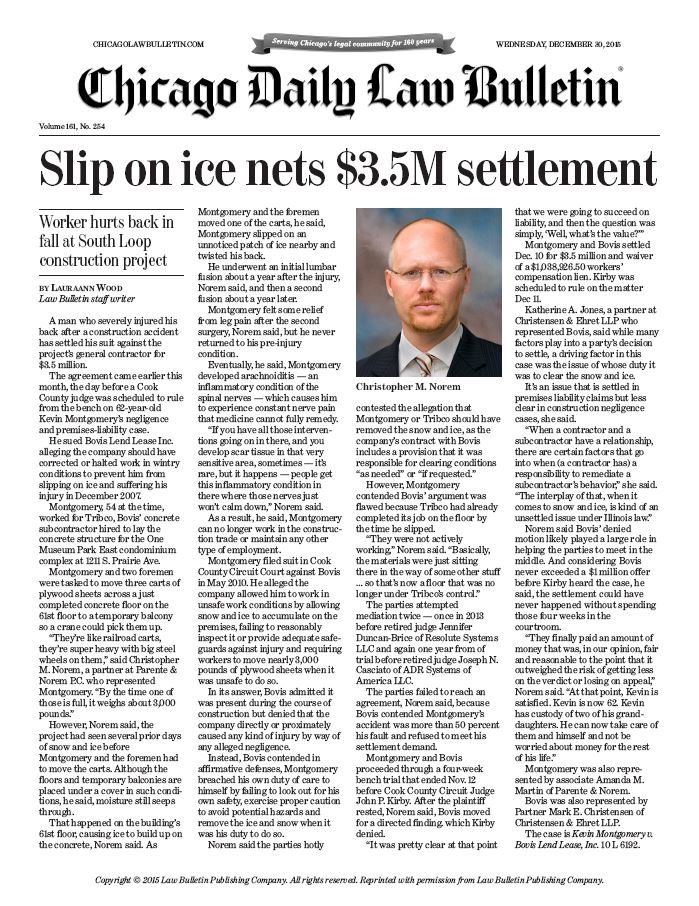 A man who severely injured his back after a construction accident has settled his suit against the project’s general contractor for $3.5 million.

The agreement came earlier this month, the day before a Cook County judge was scheduled to rule from the bench on 62-year-old Kevin Montgomery’s negligence and premises-liability case.

He sued Bovis Lend Lease Inc. alleging the company should have corrected or halted work in wintry conditions to prevent him from slipping on ice and suffering his injury in December 2007.

Montgomery, 54 at the time, worked for Tribco, Bovis’ concrete subcontractor hired to lay the concrete structure for the One Museum Park East condominium complex at 1211 S. Prairie Ave.

Montgomery and two foremen were tasked to move three carts of plywood sheets across a just completed concrete floor on the 61st floor to a temporary balcony so a crane could pick them up.

“They’re like railroad carts, they’re super heavy with big steel wheels on them,” said Christopher M. Norem, a partner at Parente & Norem P.C. who represented Montgomery. “By the time one of those is full, it weighs about 3,000 pounds.”

However, Norem said, the project had seen several prior days of snow and ice before Montgomery and the foremen had to move the carts. Although the floors and temporary balconies are placed under a cover in such conditions, he said, moisture still seeps through.

That happened on the building’s 61st floor, causing ice to build up on the concrete, Norem said. As Montgomery and the foremen moved one of the carts, he said, Montgomery slipped on an unnoticed patch of ice nearby and twisted his back.

Montgomery felt some relief from leg pain after the second surgery, Norem said, but he never returned to his pre-injury condition.

Eventually, he said, Montgomery developed arachnoiditis — an inflammatory condition of the spinal nerves — which causes him to experience constant nerve pain that medicine cannot fully remedy.

“If you have all those interventions going on in there, and you develop scar tissue in that very sensitive area, sometimes — it’s rare, but it happens — people get this inflammatory condition in there where those nerves just won’t calm down,” Norem said.

As a result, he said, Montgomery can no longer work in the construction trade or maintain any other type of employment.

Montgomery filed suit in Cook County Circuit Court against Bovis in May 2010. He alleged the company allowed him to work in unsafe work conditions by allowing snow and ice to accumulate on the premises, failing to reasonably inspect it or provide adequate safeguards against injury and requiring workers to move nearly 3,000 pounds of plywood sheets when it was unsafe to do so.

In its answer, Bovis admitted it was present during the course of construction but denied that the company directly or proximately caused any kind of injury by way of any alleged negligence.

Instead, Bovis contended in affirmative defenses, Montgomery breached his own duty of care to himself by failing to look out for his own safety, exercise proper caution to avoid potential hazards and remove the ice and snow when it was his duty to do so.

Norem said the parties hotly contested the allegation that Montgomery or Tribco should have removed the snow and ice, as the company’s contract with Bovis includes a provision that it was responsible for clearing conditions “as needed” or “if requested.”

However, Montgomery contended Bovis’ argument was flawed because Tribco had already completed its job on the floor by the time he slipped.

“They were not actively working,” Norem said. “Basically, the materials were just sitting there in the way of some other stuff … so that’s now a floor that was no longer under Tribco’s control.”

The parties failed to reach an agreement, Norem said, because Bovis contended Montgomery’s accident was more than 50 percent his fault and refused to meet his settlement demand.

“It was pretty clear at that point that we were going to succeed on liability, and then the question was simply, ‘Well, what’s the value?’”

Katherine A. Jones, a partner at Christensen & Ehret LLP who represented Bovis, said while many factors play into a party’s decision to settle, a driving factor in this case was the issue of whose duty it was to clear the snow and ice.

It’s an issue that is settled in premises liability claims but less clear in construction negligence cases, she said.

“When a contractor and a subcontractor have a relationship, there are certain factors that go into when (a contractor has) a responsibility to remediate a subcontractor’s behavior,” she said. “The interplay of that, when it comes to snow and ice, is kind of an unsettled issue under Illinois law.”

Norem said Bovis’ denied motion likely played a large role in helping the parties to meet in the middle. And considering Bovis never exceeded a $1 million offer before Kirby heard the case, he said, the settlement could have never happened without spending those four weeks in the courtroom.

“They finally paid an amount of money that was, in our opinion, fair and reasonable to the point that it outweighed the risk of getting less on the verdict or losing on appeal,” Norem said. “At that point, Kevin is satisfied. Kevin is now 62. Kevin has custody of two of his granddaughters. He can now take care of them and himself and not be worried about money for the rest of his life.”